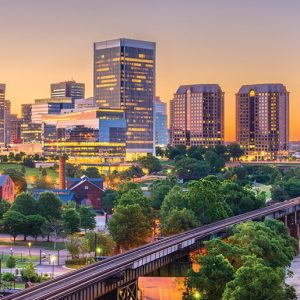 As the state capital of the Commonwealth of Virginia, Richmond has about a quarter-million residents. The entire Richmond Metropolitan area boasts a population of over 1,200,000. The city’s proximity to Washington D.C., the James River, and often-traveled interstates ensures there is always something going on. Whether you are on the prowl for a new job, visiting as a tourist or simply passing through on your way to find an Airstream for sale, you will have a blast in Richmond.

The city is located along the James River, making it quite scenic and commercially vibrant. Richmond is the world’s sole site of triple crossing rail lines. The local economy is fueled by a handful of industries including finance, law, and government. Numerous highly regarded banking firms, law firms, and governmental agencies are located in downtown Richmond. Some of the top local employers include Fortune 500 companies, WestRock, Dominion Energy, the Federal Reserve Bank and a litany of federal agencies. Richmond is also home to the United States Court of Appeals.

Local advertising agencies and businesses include the revered Martin Agency, launched in 1965. This agency employs more than 500 local Richmond residents. The city also features the uber-successful Virginia Biotechnology Research Park. This space opened in 1995, serving as an incubator for pharmaceutical and biotech businesses. The park spans a whopping 34 acres.

Things to do in Richmond

Richmond is certainly a bustling economic center yet there is plenty to do aside from work your tail off. The revitalized downtown area is highlighted by the Greater Richmond Convention Center, Canal Walk the Richmond CenterStage Performing Arts Center and Virginia Commonwealth University campuses. Richmond CenterStage is particularly popular as this complex includes an arts education center, a community playhouse, and a multipurpose hall. If you are a foodie, you will feel right at home in Richmond. The area’s best restaurants are located in Jackson Ward, Church Hill, and the Fan District. Locals rave about the tasty fare at the Metzger Bar & Butchery. All in all, the area has more than a dozen microbreweries. 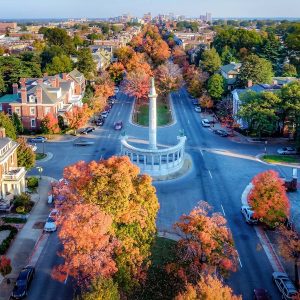 Richmond’s Monument Avenue has an array of monuments and memorials sure to pique your interest. From the Christopher Columbus monument by Byrd Park to the Bill Bojangles Robinson monument located at Jackson Ward, the A.P. Hill monument and the Virginia War Memorial on Belvedere.

Head on over to the Boulevard proper and you will find some truly amazing museums and monuments. From the Virginia Museum of Fine Arts to the Virginia Historical Society, the Science Museum of Virginia, the Virginia Center for Architecture and the Children’s Museum of Richmond, there is a seemingly endless number of sites to visit. Venture downtown and you will find the Valentine Richmond History Center and the Library of Virginia. Head on over to the riverfront and you will find the Richmond National Battlefield Park Visitors Center along with the American Civil War Center at Historic Tredegar. Robert E. Lee’s former home still stands in downtown Richmond on Franklin Street. Additional historical sites include the Edgar Allan Poe Museum and St. John’s Church where Patrick Henry gave his epic “Give me liberty or give me death” monologue.

Take in a Show at a Richmond Theater

When it comes to entertainment, Richmond has no shortage of options. The city owns its own opera house, dubbed the Altria Theater. Summer concerts are held at the Classic Amphitheater at Strawberry Hill. The north side of the city features a 47,000 square foot space known as the Gay Community center. Here, you will find a massive art gallery and expansive meeting spaces.

In Need of an Airstream, RV, Camper or Other Recreational Vehicle?

If you are searching for an Airstream for sale in Richmond, an RV, recreational vehicle or camper, you are in luck. Out-Of-Doors Mart has your Airstream and RV needs covered and is a short drive from Richmond. Head south to kick the tires on Out-Of-Doors Mart’s vehicles and you will be more than impressed with the selection. Dial 866-636-2267 or 336-993-4518 to learn more about Airstreams, campers and RVs for sale.