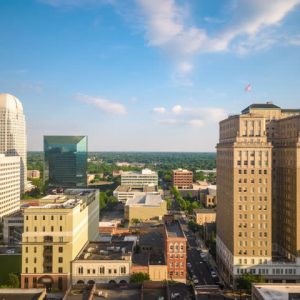 Located in Forsyth’s County seat, Winston-Salem has just under 250,000 residents, making it the second-largest municipality in the Piedmont Triad region. Only four other cities in the state have more people than Winston-Salem. The city is commonly identified by its mammoth Wells Fargo Center. This structure is the tallest office building in the region. Whether you are a Winston-Salem native or visiting the area, you are likely to rave about this city’s offerings, aesthetic beauty, and warm people.

Winston-Salem is sometimes referred to as Camel City as it has been extensively involved with the tobacco industry. Some locals simply call Winston-Salem “Winston” for short. The area has a vibrant economy, an abundance of retirees, countless elite restaurants and several colleges and universities. In particular, Wake Forest University and Winston-Salem State University are especially popular institutions. Students from cities across the United States attend both of these highly-ranked universities. The Wall Street Journal ranked Winston-Salem toward the top of its 2017 “Most Livable Downtowns” thanks to its walkability, affordable apartments, top-rated restaurants, and innumerable hotels. Furthermore, WalletHub has ranked the city as the third least expensive to launch a small business. It is clear Winston-Salem is one of the country’s top up-and-coming cities.

If you were to poll those who live outside of North Carolina about the area’s economic hotbeds, most would reference Charlotte or Raleigh as thriving cities. In reality, Winston-Salem is nearly as economically active as the aforementioned cities. A litany of corporations are headquartered in Winston-Salem. Examples include Blue Rhino, Reynolds American, Lowes Foods Stores, Krispy Kreme Doughnuts and Hanes Brands. The city was previously associated with clothing and tobacco industries. Nowadays, Winston-Salem is moving toward becoming a hub for nanotech, biotech, and high-tech jobs. The city’s top employer is Forest Baptist Medical Center. Other local employers include Novant Health and Wake Forest University

Things to do in Winston-Salem 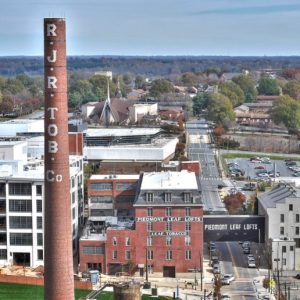 Winston-Salem has plenty for locals and visitors to do. If you are into art, you will love the Southeastern Center for Contemporary Art. This multimedia art gallery has been open for more than 60 years. The museum’s rotating art exhibits are highlighted by pieces from artists who have received either international, national or regional recognition. The Reynolda House Museum of American Art also draws its fair share of visitors. Featuring collections from the colonial era all the way up to modern times, this museum is situated in a house positioned in front of the stunning 16-acre Lake Katherine. If shopping is your thing, take a drive on over to the Hanes Mall. This shopping center has more than 200 stores, making it the region’s largest shopping mall.

If you prefer to spend your time outdoors, be sure to spend an afternoon or morning at Salem Lake. Located in the southeastern part of the city, this lake is highlighted by a 7-mile trail, a beautiful lake and ample space for walking. This lake is often described as a hidden diamond within Winston-Salem as everyone who visits truly cherishes its majestic allure and eye-popping aesthetics. Additional local attractions include the Bethabara Historic District. This site is notable as it is the location where Pennsylvania Moravians initially settled in the state of North Carolina. The district features a museum as well as a Moravian church, birdwatching opportunities, hiking trails and an impressive array of trees, plants and other greenery. If you have kids, consider taking a trip on over to the Kaleidum Downtown, previously known as the Children’s Museum of Winston-Salem. This site provides all sorts of interesting programs and exhibits meant to boost language skills, creative thinking, and curiosity in our little ones.

Searching for an Airstream in Winston-Salem, NC? Look no Further

If you are looking for an Airstream for sale in the greater Winston-Salem area, you have come to the right place.  Out-Of-Doors Mart, located to the east of Winston-Salem on the I-40, has Airstreams, RVs, campers and recreational vehicles. Check out this inventory in person and you are certain to find something to your liking. Even if you have not committed to purchasing an Airstream and simply want to kick the tires, there is no harm in seeing what is available. Reach out to us at 866-636-2267 or 336-993-4518 for more information.